Came Down Different: My Favorite Albums of 2021

Editor's note: Check out my podcast discussion with Jay Breitling about our favorite music of '21 on Completely Conspicuous (here's parts 1 and 2).

Well, it wasn't 2020, but 2021 still didn't mark the return to normalcy we were hoping for. Sure, concerts came back, but so did COVID in different forms and ultimately, we're sitting here at the end of the year seeing things shut down again. The big difference is a lot of us are vaccinated, so hopefully things will get under control at some point soon. 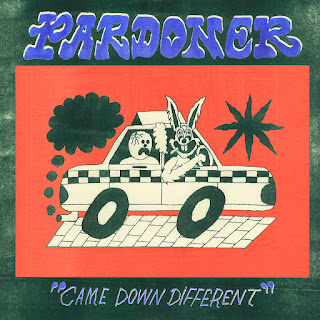 All that said, it was still a good year for indie rock. Not as politically charged as 2020 was, but there were some fine releases that kept us rocking even with masks on. Here are my top 15.

15. Bachelor - Doomin’ Sun: Palehound’s Ellen Kempner and Jay Som’s Melina Duterte team up to deliver a collection of intensely personal relationship songs. Recommended: “Stay in the Car,” “Sand Angel,” “Back of My Hand”

14. Chubby and the Gang - The Mutt’s Nuts: London punk act introduces some new dimensions to their sound, working in some slower songs that add some dynamics to the all-out rippers. Recommended: “Getting Beat Again,” “The Mutt’s Nuts,” “Overachiever”

13. Courtney Barnett - Things Take Time, Take Time: On her third full-length release, Barnett keeps things low key but always interesting. No barn-burning guitar rippers here, but an introspective set of songs focused on vulnerability, both hers and that of loved ones. The instrumentation is sparser here, as her regular backing musicians are absent. It’s a quieter album from Barnett, but an effective one. Recommended: “Rae Street,” “Sunfair Sundown,” “Take It Day by Day”

12. Mdou Moctar - Afrique Victime: This one came out of left field for me, having never heard of the Tuareg guitarist based in Niger. Moctar sings in the Tamasheq language, but his volcanic guitarwork transcends any language barrier. Signed to Matador, Moctar and his band churn through soaring psychedelic rock songs that decry violence in Niger and other issues affecting his people there. Recommended: “Chismiten,” “Taliat,” “Asdikte Akal”

11. Ducks Ltd. - Modern Fiction: The Toronto-based duo followed up the re-release of their debut EP Get Bleak with a full-length later in the year, embracing the jangle-pop ethos with a rollicking collection. Definite echoes of Rolling Blackouts Coastal Fever, who they’ve toured with previously. Hooky and bright, with uneasy and reflective lyrics, Ducks Ltd. is walking an entertaining tightrope. Recommended: “Old Times,” “18 Cigarettes,” “Fit to Burst”

10. Juliana Hatfield - Blood: Twenty-nine years into her solo career (after five years of playing with Blake Babies and Lemonheads), Juliana Hatfield is showing no signs of slowing down. She followed up her excellent 2019 album of Police covers with this angry, gutsy release. Hatfield plays almost every instrument and revels in a lacerating series of songs that focus on personal and political violence, spilling plenty of theoretical blood. Recommended: “The Shame of Love,” Suck It Up,” “Mouthful of Blood”

8. Ovlov - Buds: A Steve Hartlett band that supposedly called it quits in ‘19, Ovlov returns with a short but sweet (25 mins) epic filled with hot solos, but also melodic and poppy embellishments that fill out the sound. Recommended: “Land of Steve-O,” “Cheer Up, Chihiro!,” “Feel the Pain”

7. St. Vincent - Daddy’s Home: St. Vincent goes for a late ‘70s NYC vibe, steeped in Bowie. Musical chameleon Annie Clark has already had an incredible career, proving herself to be a terrific guitarist, bouncing from persona to persona, and collaborating with the likes of David Byrne, Dua Lipa and the surviving members of Nirvana. On this album, she puts aside the electro-pop of 2017’s Masseduction and goes back to the sound of ‘70s rock as she deals with personal issues like her father’s incarceration, her romantic struggles, and not wanting to have kids. Super compelling and always interesting. Recommended: “Pay Your Way In Pain,” “Down and Out Downtown,” “At the Holiday Party”

6. The War On Drugs - I Don’t Live Here Anymore: Adam Granduciel keeps doing his thing, pushing the synths more to the front over the guitar and steeping everything in a mid-80s rock sound. He gets criticized as Mr. Mister v. 2.0, but dammit, it works. The War on Drugs has gone from a small indie act to a bona fide arena band in the last several years and their sound has definitely evolved. Recommended: “Wasted,” “I Don’t Wanna Wait,” “Victim”

5. Turnstile - Glow On: On their fourth album, the Baltimore hardcore act busts through, mixing in power pop, dance, and other elements in with monster riffs. Produced by Mike Elizondo (previously worked with Eminem, 50 Cent), the album expands the band’s sound palate with a lot of interesting percussion, synths and other embellishments. Dev Hynes of Blood Oranges makes a few appearances. But ultimately, Glow On is about the bangers and it delivers emphatically. If this is the future of hardcore, sign me up. Recommended: “Holiday,” “Blackout,” “Lonely Dezires”

3. Parquet Courts - Sympathy for Life: One of the most consistently satisfying bands of the last decade, PQ continues to deliver the goods, embracing a Talking Heads vibe with some dance and world sounds incorporated into their post-punk mix. The album has a real NYC feel to it, from the upbeat "Walking at a Downtown Pace" to the call for social change in "Marathon of Anger." Recommended: “Walking at a Downtown Pace,” “Marathon of Anger,” “Black Widow Spider”

2. Dinosaur Jr. - Sweep It Into Space: Now five albums and 16 years after reuniting their original lineup, Dinosaur Jr. returns with another reliably excellent album. With some help from Kurt Vile, the band sounds as powerful as ever but incorporates some different melodic touches into the piledriver Dino approach, including a couple of excellent Lou Barlow tunes. Still, the album delivers the common Dino Jr. denominator: it's full of J. Mascis ripping sweet solos and crunchy riffs, which is never a bad thing. Recommended: “I Ran Away,” “Garden,” “N Say”

1. Pardoner - Came Down Different: Took me a while to pick up on this release from the Bay Area act, but I consistently ended up playing it throughout the year. Brash, Pavement vibe with catchy songs and big riffage. The slack rock was strong with this record, but with a harder edge than, say, Kiwi Jr.  Just a fun ripper of an album that doesn't let up from beginning to end. Recommended: “Donna Said,” “Totally Evil Powers,” “Bunny’s Taxi”

Mac McCaughan - The Sound of Yourself

Fiddlehead - Between the Richness

Mogwai - As the Love Continues

Fridge Poetry - Half the Battle

Glitterer - Life Is Not a Lesson

Cloud Nothings - The Shadow I Remember

This week, I'm joined by guest Matt Phillion as we discuss the resurgence of role-playing games. Listen to the episode below or downl...