Colossus of Rhodes: My Favorite Albums of 2019

Editor's note: Check out my podcast discussion with Jay Breitling about our favorite music of the year on CompCon (here's parts 1, 2 and 3).

There are certain things you can count on of late. Disheartening political scene. Bleak outlook for the planet. And lots of excellent new music to enjoy. Only one of those things is enjoyable, and that is what I'll discuss here. So let's get into it. 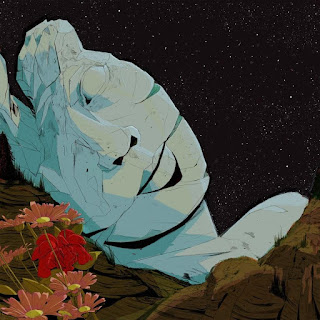 15. Kim Gordon - No Home Record
It's kind of amazing that after 38 years in the biz, Kim Gordon released her first solo album in 2019. Not that she hasn't been busy since the breakup of Sonic Youth in 2011, releasing three records with the band Body/Head that weren't too dissimilar from SY. But with No Home Record, Gordon dives into a totally different in-your-face sound: Slamming bass, rattling drums, atonal noise, all topped off by her non-traditional vocals. She's never really been a singer so much as a yeller/whisperer, but it works. No Home Record is loud and unrelentingly modern, while still retaining Gordon's post-punk coolness. (Recommended: "Air Bnb," "Murdered Out," "Sketch Artist.")

14. Desert Sessions - Vols. 11 and 12
Josh Homme is not one to sit around idly. He's always working on something, and this year, it's the revival of his Desert Sessions project, which involves Homme improvising with a star-studded variety of performers. Ten volumes were released between 1997 and 2003, but since then, Homme turned his focus to Queens of the Stone Age, Eagles of Death Metal and Them Crooked Vultures. But 2019 marked the return of the sessions, with guest appearances from Billy Gibbons, Les Claypool, Jake Shears of Scissor Sisters, Matt Sweeney of Chavez, Mike Kerr of Royal Blood and Stella Mozgawa of Warpaint, among others. Dubbed "Arrivederci Despair" and "Tightwads & Nitwits & Critics & Heels," the two volumes just eight songs, but they're eight really good songs. Album opener "Move Together" features Homme-esque vocals from Gibbons and starts slowly before lurching to loud life in QOTSA fashion. There are some varied sounds depending on the singer ("If You Run" is a folky jam featuring newcomer Libby Grace, Homme sings two songs and there's a little comic relief on "Chic Tweetz"). A fun listen while we wait for the next Queens album. (Recommended: "Move Together," "Noses in Roses Forever," "Something You Can't See").


13. Mark Lanegan Band - Somebody's Knocking
Don't look now, but Mark Lanegan has been quietly banging out excellent albums for what seems like forever. His latest release continues his shift toward electro-goth sounds combined with his classic devilish baritone vocals. Produced by Alain Johannes (Eleven, Them Crooked Vultures, a zillion Josh Homme-related projects), Somebody's Knocking features a steady dose of early Joy Division/New Order/Depeche Mode mixed with the razor's edge of bands like the Gun Club. It's a heady mix and one that fits perfectly with Lanegan's smoky, time-worn voice. Lanegan's sung on a ton of different styles of music, from grunge to blues to screaming hard rock to folk, with a ton of different artists (Queens of the Stone Age, Screaming Trees, Greg Dulli, Isobel Campbell, Soulsavers, Neko Case) but he seems really in his element here. (Recommended: "Stitch It Up," "Night Flight to Kabul," "Disbelief Suspension.")


12. Pile - Green and Gray
Pile has been one of the most consistently interesting and underrated bands of the last several years. The Nashville-via-Boston noise-rock act has been churning out excellent albums and playing a ton of shows (and when they're not playing, frontman Rick Maguire is doing solo gigs) year after year. With Green and Gray, the band retains its serrated edge with songs that aren't remotely catchy or anthemic. And it doesn't matter, because Pile kicks ass. Whether raging about a racist government flunky or musing about a panic attack or quieting things down with a meditation on loneliness, Pile manages to keep things interesting and unpredictable. (Recommended: "The Soft Hands of Stephen Miller," "Bruxist Grin," "Hair").
11. Hallelujah the Hills - I'm You
It was an interesting decade for this Boston band. They started it off by working with Titus Andronicus on that band's breakthrough album The Monitor and then self-released three studio albums and a rarities comp to critical acclaim and commercial crickets. They collaborated with David Berman's Silver Jews. Bandleader Ryan Walsh wrote the terrific and expansive book "Astral Weeks: A Secret History of 1968," which uses the Boston recording of the classic Van Morrison album as a jumping off point to examine...actually, there's so much in this book that you just have to read it. And yet, they're virtually unknown, and it's a damn shame. On I'm You, Walsh explores how rock music affects us with epic, occasionally shambolic and cathartic songs. His always clever and literate lyrics make every listen rewarding. Had this album not come out in mid-November, it undoubtedly would be higher on my list. As it is, I'm still digging into it and realizing that Hallelujah the Hills is one of the great unsung bands of our time. (Recommended: "I'm You," "Folk Music Is Insane," "Running Hot With Fate").

10. Ride - This Is Not a Safe Place
The shoegaze pioneers reunited in 2016 after taking two decades off and with their second post-reunion release (after 2016's Weather Diaries), they're sounding vital and refreshed. A little more relaxed than the previous album, This Is Not a Safe Place finds Ride reaching back to their classic '90s guitar landscapes, but also exploring some different sounds, mixing in some dream-pop, post-punk and some bright jangle-rock. It's an exhilarating mix from a band that still has something to give. Live, the band has been bringing their A-game as well. (Recommended: "Future Love," "Repetition," "Clouds of Saint Marie").

9. DIIV - Deceiver
Speaking of shoegaze, there's something about a genre that caught fire in the early '90s that remains timeless. DIIV's third album Deceiver builds on their particular brand of shoegaze with a more muscular guitar sound. Head DIIVster Zachary Cole Smith delves into his experiences with substance abuse on the album, which balances his dark lyrics with soaring waves of guitar reminiscent of Sonic Youth and early Smashing Pumpkins. The band's previous effort, 2016's Is The Is Are, covered similar lyrical ground, but Smith admitted he wasn't quite in sobriety when he worked on that record. Not the case this time around, as Smith spent time in rehab prior to recording it. The results are unsettling and captivating. (Recommended: "Skin Game," "Horsehead," "Like Before You Were Born").


8. Mike Krol - Power Chords
Mike Krol is known for frenzied blasts of garage rock and his fourth release Power Chords is no different. But even though he delivers punchy and quick rockers, the lyrics tell a different story. You get a hint of the album's intent by its terrific cover, which finds Krol playing guitar in his bedroom like the prototypical disaffected teen, but he's got a black eye and bloody nose. While he's no longer a teen, the 35-year-old Krol is still working through some shit on this record, whether it's career self-doubt or broken relationships. But Krol's therapy involves cranking up the distortion and rocking the eff out. It's more fun than a black eye has any right to be. (Recommended: "What's the Rhythm," "An Ambulance," "Nothing to Yell About").
7. Ex Hex - It's Real
Back when Mary Timony first burst onto the indie scene with the bands Autoclave and Helium, big riffs and hot solos were nowhere to be found in her music, which was angular and subtle. But her role in the 2011 supergroup Wild Flag (featuring Carrie Brownstein and Janet Weiss of Sleater-Kinney) seemed to have reawakened the rock god inside. Timony's power trio Ex Hex has built two albums now around the power of hard rock, with meaty, good-time rockers. Timony, bassist Betsy Wright and drummer Laura Harris have coalesced into a thrilling live act. While the band's 2014 debut Rips had more of a '70s power pop feel, It's Real has moved on to '80s arena rock glory with longer songs that pay off with catchy choruses and killer riffs. It's fun but unlike a lot of '80s big-haired rock, it's not dumb. ("Tough Enough," "Diamond Drive," "Rainbow Shiner").
6. Purple Mountains - Purple Mountains
It was a great comeback story. After 10 years of radio silence, indie rock poet David Berman returned with a new project called Purple Mountains. His work as Silver Jews with erstwhile bandmates including Stephen Malkmus, Bob Nastakovich and Will Oldham was well-received and classic, but he seemingly was done with the limelight. So his return was welcome, especially given the quality of Purple Mountains. Backed by the band Woods, the new release is startlingly direct and earnest, inspired by his mother's death (as evidenced by "I Loved Being My Mother's Son"). A tour was announced, but before it could begin, Berman committed suicide in August. The album is certainly influenced by his separation from his wife Cassie and depression is a common undertone, but it's also wickedly clever and literate, as the well-read Berman was known to be. While it's sad that we lost an indie genius too soon, Purple Mountains serves as a fitting epitaph. (Recommended: "Darkness and Cold," "Margaritas at the Mall," "Nights That Won't Happen").
5. Bob Mould - Sunshine Rock
Bob Mould is proof positive that getting older doesn't mean you have to slow down. At 59, Mould could easily rest on his laurels as a punk godfather with nearly 40 years of amazing accomplishments (see Husker Du, Sugar and his solo catalog). But much of this past decade has been spent reconnecting with his rock past. Since joining forces in 2012 with rhythm section Jason Narducy and Jon Wurster, Mould has made four pummeling albums that rival his glory days. But on Sunshine Rock, he leavens that heaviness with a more optimistic outlook than in the past. It's an interesting turn for a still-vital artist. (Recommended: "What Do You Want Me to Do," "Thirty Dozen Roses," "Sin King").

4. Sharon Van Etten - Remind Me Tomorrow
I fully admit to not being overly familiar with Van Etten's previous work, but her fifth album grabbed my attention with its synth-driven and sweeping looks at life as a teenager and the various pitfalls she (or her protagonist) encountered. Van Etten revisits those teenage decisions with the wisdom of hindsight, but the excitement of being in the moment. (Recommended: "Seventeen," "Comeback Kid," "No One's Easy to Love").

3. Titus Andronicus - An Obelisk
Patrick Stickles and his rotating cast of rockers have made a decade's worth of big statements on long, grandiose albums. The band's previous release, 2018's A Productive Cough, was more of an acoustic affair that garnered mixed reviews. This time around, the band hunkered down with Bob Mould at Steve Albini's Electrical Audio studio and cranked out a tight, 38-minute collection of punk ragers that harks back to the late '70s/early '80s sound of bands like the Clash. It's refreshing, loud and altogether exhilarating. (Recommended: "Troubleman Unlimited," "(I Blame) Society," "Tumult Around the World").

2. PUP - Morbid Stuff
On their third album, the Toronto pop-punk act continues to excel with an angry, angsty collection of bangers that shout at the many devils of everyday life: Depression, anxiety, failure, broken relationships. But they counteract the bummed-out lyrics with uptempo songs. It's a 37-minute whirlwind of angry awesomeness. (Recommended: "Morbid Stuff," "See You at Your Funeral," "Scorpion Hill").

This week, I'm joined by guest Matt Phillion as we discuss the resurgence of role-playing games. Listen to the episode below or downl...